Now Is Not the Fracking Time

My Water is On Fire Tonight - Studio 20 NYC

The issue of Hydraulic Fracturing seemed to come out of nowhere and into the lead story on the news last fall here on the east coast of Canada. Between May and October of 2013 the Elsipogtog people of New Brunswick were protesting the seismic exploration of their tribal land. If the tests proved favourable for the gas companies, fracturing may have commenced. The First Nations people had concerns about the harm to the wildlife, air and water quality. The protesters included members of the surrounding communities and found supporters many miles away. The highway near Rexton, New Brunswick was closed to stop company vehicles from carrying out tests. Some battles were fought and lost in the courts. Most of the awareness came on the streets of the province. At the height of the skirmish in the fall, 200 police officers tried to find compromise with the people and their concerns. But 40 people were arrested and 5 police cars were torched.

But we became aware and began to understand why? What was fracking and why did we not want it in our backyards?

In reality shale gas exploration has been going on for the past 50 years. But technology has changed the game since at least 2005 when the first hydraulic well was drilled in Texas. The process of fracking involves shattering rock to find natural gas trapped between the solid crust. Up until then the only way that the gas could be taken from beneath the earth's surface was by drilling straight down and finding an elusive pocket. 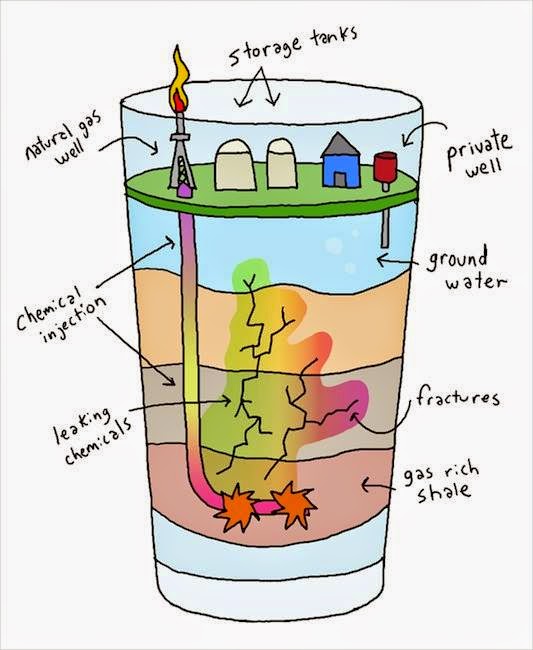 Ah...but if we can find a better way that is cheaper and more lucrative we shall do it. Advancements in technology have led to the ability of drills to travel horizontally and not just vertically. A lethal combination of highly pressurized water, sand and a host of chemicals acts as both a lubricant and tiny explosives that shatter solid rock.

Well, right off the bat, my unscientific brain has problems. I am not comfortable with anything that alters the planet so we can exploit it. Shattering solid rock is shattering the foundation on which we live. Right now, anyone of us could potentially be standing above this instability. Our homes and buildings once built on solid foundations are not secure anymore. And I wondered what was going on with all the reports on sinkholes suddenly appearing and swallowing homes and unsuspecting citizens and their property. Wonder no more!

But there is much more to be concerned about. The water! Our most precious of resources, when the fresh water is gone so are we. There are already droughts affecting the quality of life in many areas in the Americas. In this century, we have probably all experienced water shortage or restrictions at one time or another. That alone should make us wary. And yet some governmental agency decided that is was okay for an average of 3.575 million...yes million...gallons of fresh clean drinking water to be used per day, per well in the process of fracking.
What?? Stop and let that sink in. The fracking wells can use the same amount of fresh water that is consumed by an entire metropolitan city in one day. And its gone forever.
There was a social media furry over the summer time ALS ice bucket challenge to raise awareness of Lou Gherig's disease or Amyotrophic Lateral Sclerosis. The problem with the challenge was that people felt that in the middle of a drought in parts of the United States it was a waste of potable drinking water to pour it over one's head in fun. With one report suggesting that over 100 million dollars was raised to fund research and support programs for sufferers there was certainly a positive spin on this activity. And at least the water was not contaminated but was returned to the earth by absorption or evaporation. 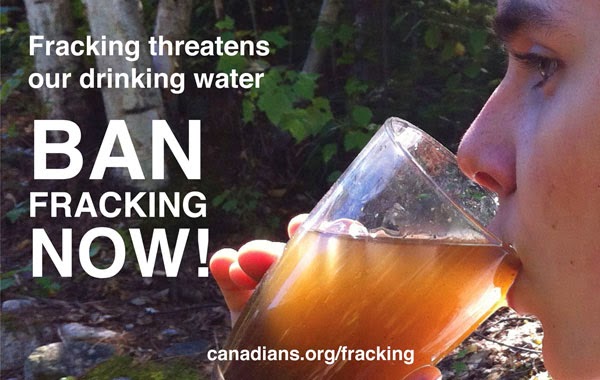 All the water used in the fracking process is toxic soup when it is forced into the ground and upon return to the surface. And what is to be done with that concoction. It will never again be a source of drinking water for sure and just how to deal with it without risking further contamination is just as perplexing an issue. The good news is that the water can be used more than once during the process of fracking. Thank heavens for small favours. However, eventually it becomes so contaminated that it cannot be used any longer and must be disposed of. With an average of 750 chemical compounds in the dirty water, this is a problem. Initially this flow back was simply dumped back into nearby rivers or onto fields. It was no secret that municipal water treatment facilities could not handle the purification of such a chemical soup. Then cement pits were constructed to contain the water until evaporation occurred without ground contamination and then the remaining sludge could be buried. But questions were eventually raised about the long term health effects for the planet and people. Companies even tried pumping the dirty water back into the bowels of the earth far from the surface and water tables - but that process caused earthquakes. There is not a viable solution to this problem yet. For that reason alone this fracking process should be prohibited. 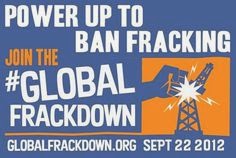 Perhaps we will wake up when we haven't got a clean glass of water to drink and the toxins pumped into the ground have contaminated every living thing growing in and living on the ground. Hopefully it won't be too late.

Another issue with the fracking process itself is the burning off of gases that seep back to the surface with the flow back water. It is burned off at the surface causing pollutants to permeate the surrounding air. With wells often being found within 350' or so of communities, schools, playgrounds - this is a huge health concern. Many local residents have tried to petition to close or relocate nearby wells but their pleas and health evidence often fall on deaf ears. The airborne chemicals are known as VOC's  (much less intimidating a moniker than the frightening Volatile Organic Compounds). Despite the term organic in its' label, these compounds are anything but - in fact they are both carcinogenic and contributors to green house gases which in turn contribute to the changing global climate patterns. 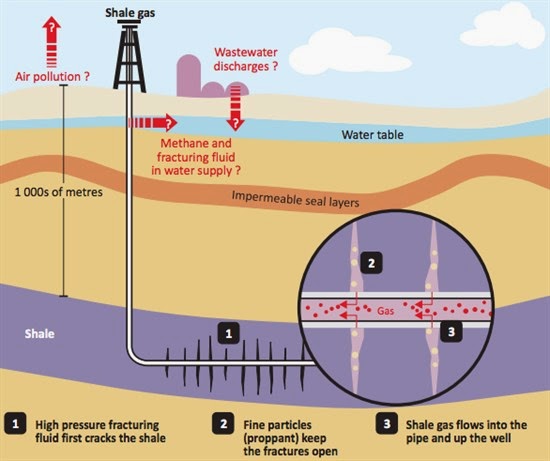 The final concern with this process that I am going to address is the contamination of the ground water, the ground water that burns as the included song tells us. A little background first. When the pressurized water is mixed with chemicals and sand to create the fractures in the rock, some chemical coated sand is left behind to keep the fractures open when the water is returned to the surface. Without the water to hold the well open, a cement casing is poured into the well to shore up the sides. A disturbing but oft-quoted statistic is that 6% of the underground cement casings will develop leaks. It is methane that is leaching into the surrounding area including rural well water supplies that are used for drinking and irrigation. Often miles of pipelines are snaking and buried beneath farm land. Once water is contaminated it can't be reversed

Are there any reasons to support the fracking industry? Some politicians would say yes.

Pointing a finger at the more financially stable western provinces we hear promises of great wealth and prosperity that will come with the exploitation of Mother Earth. Increased jobs, lower taxes and lots of gas to fuel our greedy appetite but the true costs are not calculated, considered or talked about.
Farmers that were struggling to stay viable in tough economic times are suddenly splurging on new equipment and improvements to the homestead because they have leased a portion of their land to the gas companies wanting to put pipelines under the vegetables. I think that there has to be other answers for the farming community. We should already be concerned by the contamination of our food source by pesticides, antibiotics and growth hormones and be working to improve the situation not create more problems.
The Monsanto company and their GMO's are a constant source of public fear especially on social media. We need to stop quivering in our boots and allow these big corporations hear our collective screams to stop. We simply cannot afford to exploit the earth now and pay later. Later may never come. 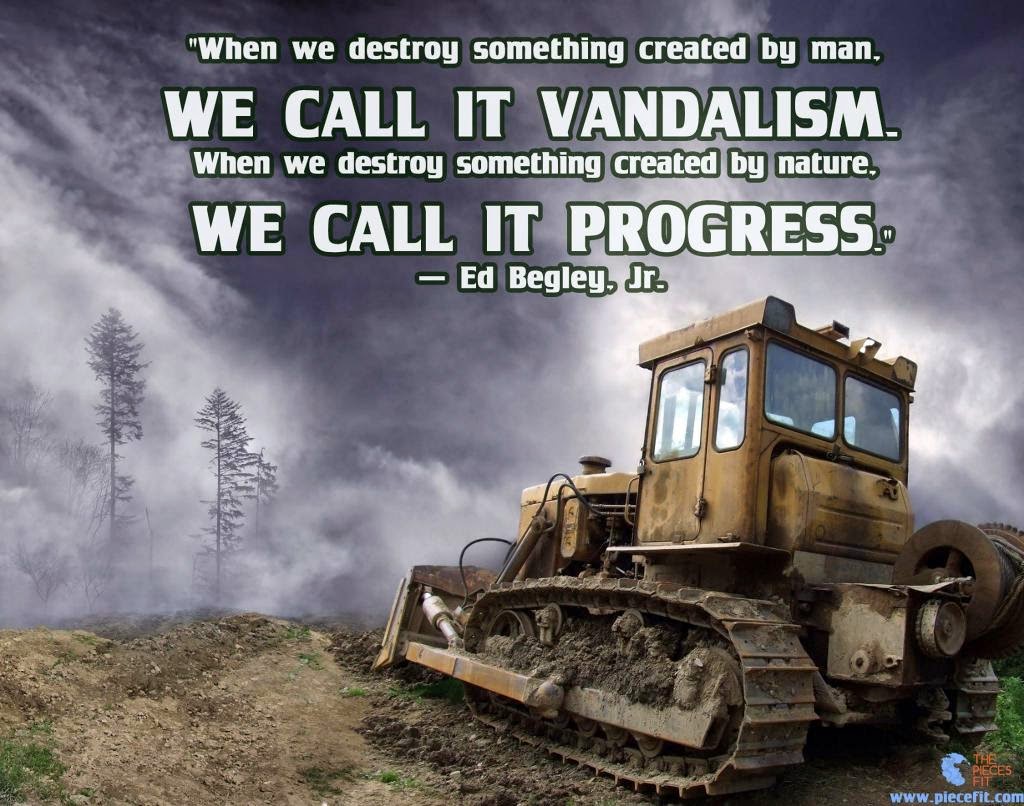 Wealth before health...I am not willing to sacrifice fresh clean drinking water and clean air for natural gas or any other resource that abuses My Mother Earth. I am grateful that Nova Scotia is one province that has taken a stand against Hydraulic Fracturing by issuing a ban throughout the province.

As of last night, the province of New Brunswick made their voices heard. They put the health of the citizens and the planet before the wealth of the government. Kudos to them. In one of the highest turnouts for a provincial election, New Brunswickers said no the Progressive Conservatives platform of allowing the prosperity via fracking. The Liberals with no clear platform on job creation and provincial viability still won a majority government.

Yeah for the people of New Brunswick, Nova Scotia, France, Bulgaria and Vermont who all took a stand in some way against the exploitation and unknown issues caused by Hydraulic Fracturing. May the list continue to grow as people educate themselves.

And the lone protester on the streets of Halifax who did his part to try and warn us all.

Posted by Unknown at 4:32 pm No comments: