I first heard this song back in April of 2015 and being a self-professed Keelorite I was immediately drawn to it for that factor alone. But like the rest of Greg Keelor's body of work, I loved it because of what he had to say and how he said it. Greg's songs tend to have deep personal meaning for me and for the record, this is not his first protest song. I figure that Greg in his youth was probably the first one at a Sit In encouraging his peers to not "Stand for It." Just before the end of the election, Blue Rodeo released the song as a call to action. Smart move, it got people talking.

It is October 2015 and Canada is in the midst of one of the longest election campaigns in the country's history. Now, I'm not a staunch political person and I sure don't understand the reasoning behind the tremendous waste of money that went along with nearly 80 days of campaigning. But over that length of time it sure gave the average citizen the chance to hear all about the political promises of 3 men vying for the top position in the country, Stephen Harper, Justin Trudeau and Thomas Mulcair. There were other smaller players in the game like Elizabeth May (Green Party) and Gilles Duceppe (Bloc Quebecois) also. 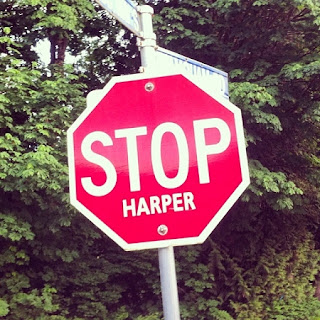 There has been a growing dislike for the current Prime Minister of Canada, Stephen Harper for some time. That sentiment just grew as time went on. I had issues from the first campaign advertisement I heard that was not full of rainbows and promises but attacks upon the perceived greatest threat to Harper, one Justin Trudeau. In my world, there is no time or place for the bashing of another human being especially for personal gain.


There were many reasons cropping up on social media to Stop Harper. He was known for taking a back pocket position in the pants (near the farts and smell, not the wallet) of the corporate world. He seemed to speak for them more than citizen tax-payer. We faced such issues as the preservation of the environment, (what Kyoto protocol?) the safety and security of the people, scientist and researchers were handcuffed trying to do their job and slapped with gag orders (of a sort). And while the people were questioning their dwindling rights to freedom of speech, the oil companies were allowed to bleed us dry and don't get me started on fracking! 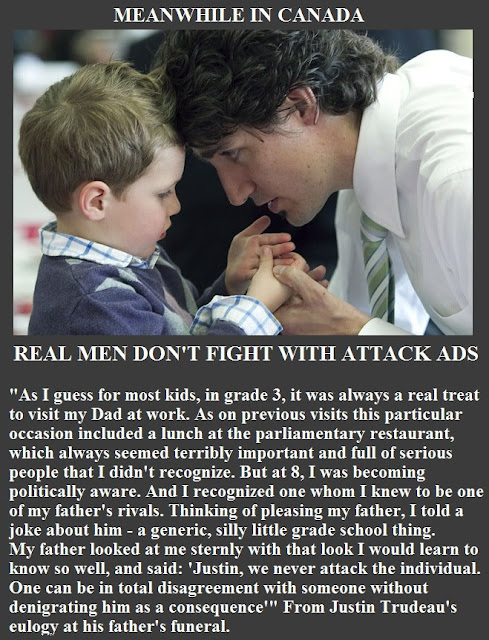 The only non-partisan source for news and information about our people and our country, the CBC has been decimated. Consider Clara Hughes fundraisers for Mental Health "Let's Talk" and "Clara's Big Ride" which are sponsored in part by Bell Canada. The CBC and Bell owned television stations supported and promoted this worthy cause but nary a word was spoken on Rogers owned stations. This is one example proving we need the CBC for fair and honest, non-judgmental information. News, sports, music, culture, entertainment "By the people For the people."

In my humble opinion, it is the lack of funding for the CBC that sold off our national dream sport of hockey to public enterprise and left it inaccessible to many without a Rogers account. Hockey knitted communities together from one end of this nation to another. In the most remote corners of this country, you could always get an antennae and access the CBC and come together. Not so much anymore.

The sky-rocketing incidence of missing and murdered indigenous women was just not very high on Harpers list of priorities. The veterans who made this country what it is today were cut off from services and support at the same time that incidences of PTSD among the military personnel was exploding. 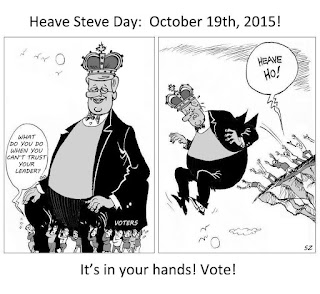 Last (for the purposes of this missive but by no means the last of the atrocities committed by Mr. Harper), at a time when on-line shopping is increasing and delivery is necessary to complete the transaction, Canada Post has become a former shell of itself. Door-to-door delivery is all but gone. The elderly are encouraged to stay in their homes avoiding long-term facilities but many are unable to access their mail which is now a potentially hazardous journey. Even the able-bodied have issues with the lack of service and inaccessibility and safety of retrieving their mail. Winter in Canada is not community mailbox friendly.

Lots of reasons to Heave Steve.

Much of what I've said could easily have been shared long before the election. But I think people should make up their own minds. Besides, I am in some part responsible for the long tenure that Stephen Harper did have. In typical Canadian fashion we forgive and hope for better until we can't take it anymore.

I'm not saying I voted for Justin Trudeau and I'm not saying I didn't. But one thing you can be sure of is I didn't approve of what Stephen Harper was doing to the country. But in the aftermath I find myself wondering what good he did do during his tenure. I put out a honest request on Facebook to help jog my memory. Instead of a jog I am barely sauntering. Maybe with time it will become clear? 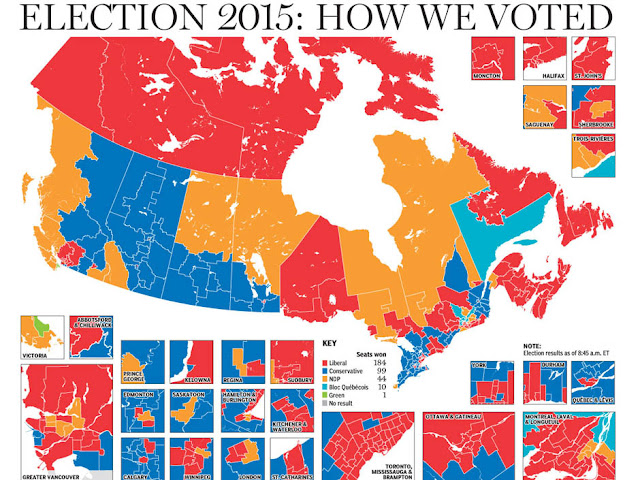 I wanted change. Canada wanted change. We got change but I was hoping for a little more colour in the political map. Democracy works best when there is a little devil looking over your shoulder. The morning after the election, I wasn't surprised by the victory of Justin Trudeau, what I was surprised by was the near annihilation of the New Democratic Party who's popularity fell below the Conservatives. I would have preferred a little more power for a dual-opposition party to hold the current government accountable. 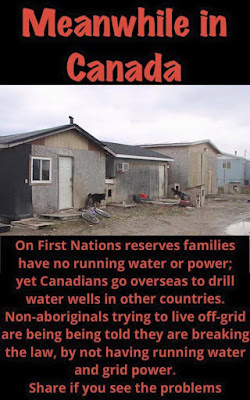 Mr. Mulcair, I have only one question for you. Who was going to pay for your $15/day childcare plan? The aging Canadian population who is closer to retirement than child-bearing age? Although I understand that there are some people in true need of such a program, I object to paying for the childcare of people who live in a 2 income household so they can maintain their "mansion" in the burbs, cottage in the north, and annual summer vacay in the south.
No it is not statistically based but my views are based on facts derived from my experience in the system. How about paying the Childcare Workers a little more of a living wage? Many are making barely above minimum wage with no benefits. Hardly enough to pay off the college loans and certainly not enough to afford their own children.

Mr. Harper, I applaud your actions which did stabalize our economy but at what cost? I don't think it much matters that we are an economically viable country if we have no country left. There are economies in some Asian countries that are booming also...and they can't breath the very air that surrounds them. I can't be the only one that sees a problem with protecting the economy at the expense of the environment and the people!

Below is a graphic that illustrates the change in tide of Canadians leading up to the October 19, 2015 election that led to a Liberal majority government, and Stephen Harper stepping down as party leader. In the end 54% of votes went to the Liberals (LPC), 29% for the Conservatives (CPC), 13% for the New Democrats (NDP), the Bloc took 10% and the Green Party took one seat. 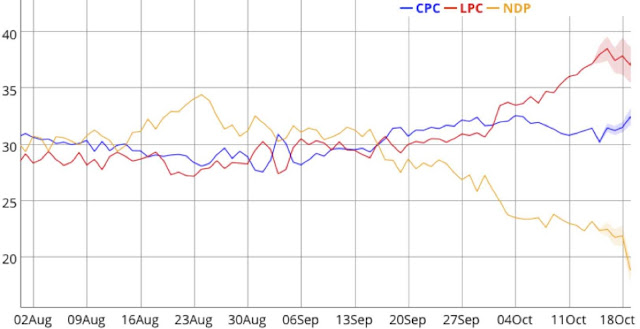 The people of Canada, in the end spoke loudly. More than 68% of eligible voters cast a ballot to make their voice heard. Although that figure is 7% higher than the last election it still falls short of the 80% average of the late 1950's and early 1960's.

So we will see how this plays out. Worse comes to worse, we will have the opportunity for a do-over. Because Canada is true, north, strong and free and a democracy.

By the way, this is not the only protest song released by Blue Rodeo. Nor is Blue Rodeo the only group to release a political or other protest song. In this election campaign alone Google tells me there were 10 songs.

For the naysayers who think that artists like Blue Rodeo should "Shut up and sing" instead of the wealthy and well-known telling us what to think. May I introduce you to the television commercial? Have you heard of product placement? Has a politician ever tried to garner your vote? Has your boss/union/or life partner tried to sway your opinion? Have you ever buckled under peer pressure?

You want to boycott Blue Rodeo because they jumped into the political arena, go ahead...it's your choice (democracy and freedom of speech in action). But, how many artists are you willing to not listen to for the same reason? Go back in history and consider the following very small sampling.


STEALIN' ALL MY DREAMS 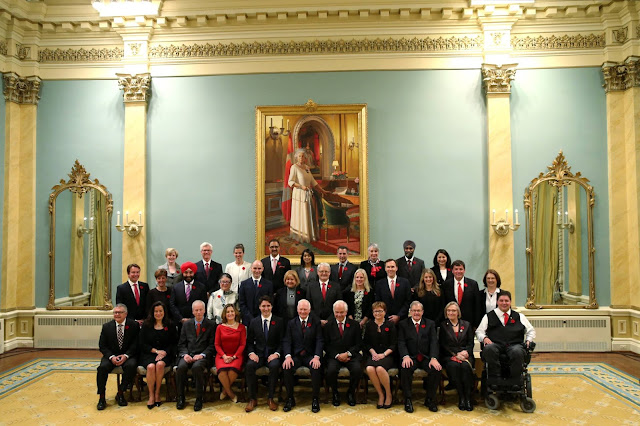