So Let's Go - An Evening with Alan Doyle

By coincidence, "Let's go" was the first full sentence my baby girl uttered some 26 years ago. And being Mothers' Day it all seems to be falling together that I write today. When you can't spend the day with your children on Mothers Day the next best thing for me is to spend the day with music. Wait that's every day...lol!

I bought my tickets for Alan Doyle back in November of last year when they first went on sale. Up early with the alarm set I was clicking furiously to nab a couple of good seats. I had no idea who the other ticket was for but the show was 6 months away. There was lots of time to decide and the person who joined me was a great pick for she has the love of music like I. We have shared a lot of musical experiences, with more on the horizon.

It was birthday last November when a friend told me that Alan Doyle would be at a book signing in the area if I was interested in going. My son (God bless his soul) sent me early birthday money so that I could buy his memoir and get it signed. What a thrill that turned out to be! We got to hear Alan reading from his book and I'm tell you that his voice and accent was so captivating that when I read the book for myself I could hear his voice in the back of my mind.

Where I Belong is a fabulous read. One of those books, I couldn't put down. Alan Doyle and I grew up in the same era but with lives as different as night and day. All right I admit that he is younger than I am. But growing up in Petty Harbour, as he did, was nothing like my existence with indoor plumbing in the bustling metropolis (in comparison) of Thunder Bay. It's funny how no matter what we think about it as adults, home is home. There is always an attachment to this place where your life began. I recommend picking up Alan Doyles book for a light summer read and some personal reflection on growing up in a small fishing village in Newfoundland. The man and the music were born there. I should note that this is not a memoir of the band Great Big Sea. The story ends before the musical wave of GBS broke.

Great Big Sea burst onto the mainstream musical scene in 1995 with the release of Run Runaway from the album Up. Their first album which was self-titled and self-produced was released in 1992 and included several traditional folk songs as well as original compositions and although it produced no chart topping hits at the time it did lead to a recording contract with Warner Brothers Canada. The climb to the top was not a gentle slope however and included extensive touring about the land which could include up to 300 days a year. Two decades later and 10 full-length releases among other projects and the band is now on hiatus. I missed my chance to see the whole band, but I have seen 2 of the founding members solo performances.

I was a fan from my first experience with the lively, move your body to the music and sing along style of Up. I was drawn to the East Coast traditional folk music that spoke of water, sailing and fishing...and rum! :) Alan Doyle has a voice that I wish I could hear whispering sweet nothings in my ear and when he speaks with that devil may care spirit and Newfoundland accent...it's all there.

And that is how the Friday night show at the Rebecca Cohn Auditorium started. Alan walked onto the stage alone, carrying a red Solo cup, he approached the microphone and began to talk to the assembled masses like he was welcoming us to his home. He then broke into song. Just him, no instruments but that velvety smooth voice with the long hair framing his face and that ready smile. You feel the passion in the words. You are drawn into his world as you, too, Dream of Home.

The Beautiful Gypsies were the back up band that soon joined Alan on stage and what an amazing assemblage of musicians. Cory Tetford on guitar is a name I am familiar with because of his association with the band Crush and his other stints with Barney Bentall and other musicians. And a beautiful smile and ready wave to an eager audience member! ;) Kendel Carson is a very talented fiddler and singer who was a part of the Paperboys, and Belle Star. I was mesmerised watching her, worried that her long blonde locks would get tangled in the bow or the strings. The hair was flying, the feet were tapping, there was energy in her performance. Kris Macfarlane took the sticks to the skins as he had done for many years with Great Big Sea. He has spent more time looking at my backside than anyone else, quipped Doyle. Plucking the string on the bass is Shehab Illyas a multi-talented filmaker, composer, photographer and musician from Halifax. And finally there was Todd Lumley who alternated between the horizontal keys on the keyboard and the vertical ones on the accordion. Todd Lumley was a member of the Canadian alternative rock band The Waltons (1987-2001) and also Hawksley Workmen.

The Waltons along with 54-40 and Spirit of the West are sadly severely underrated Canadian bands. Love them! Always and forever.

The show which marked the final stop on a North American tour celebrating his second solo album, was high energy and interspersed with thoughtful ballads. And fair warning future audience members, Alan does not like to be the only one in the house rocking it out! But with so much of the music being top-tapping infectious you can't help but want to join in the dance. So when Alan like a preacher raises his arms for his flock to stand, they do...nay they jump up ready to dance! The set list was planned perfectly for a great mix of audience participation and always beautiful music.

Young and old and everything in between, couples, partners, friends and groups. The full house was stomping and clapping, hands in the air, singing along. But it wasn't just fans in the audience, in Halifax (his home away from home on the mainland) Alan's friends and family joined him. Yes, the "fairest in the land" was in attendance. How proud she must be watching her hubby on stage. And jealous listening to all the "I love you's" screamed at him? Could've been me?

In a recent newspaper article (Metro News) Alan was quoted as saying, "I loved all my time playing music in those rooms (referring to smaller area pubs like The Lower Deck) and I always thought it was a really beautiful thing to be the powerhouse of an Atlantic Canadian pub." He still is and has that power, but now his pub is a little bit bigger. His fans are greater in number and the love fest shows no signs of slowing. Thankfully!

Taking no hiatus, Alan will soon be on the road once again, supporting The Barenaked Ladies. But before that look for him at Music Festivals happening near you. Thunder Bay, I'm jealous.

On a personal note, I want to thank my best musical friend, who has given me the courage to pursue my musical passion as a solo listener, a duet or with a band of merry followers. Thanks Debra. I am grateful.


*As always, please do not steal my words or pictures. Thank you. 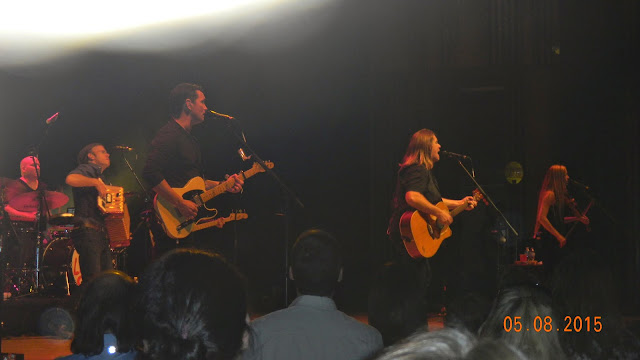 Posted by Unknown at 3:04 pm No comments: