The Memories are Forever, If the Breaths of Life are Not

Music choices for me is not about popularity but how it touches my soul at that moment. Hearing the above track just recently I was swept away in a flood of memories and knew immediately that it had to be the song for this post. 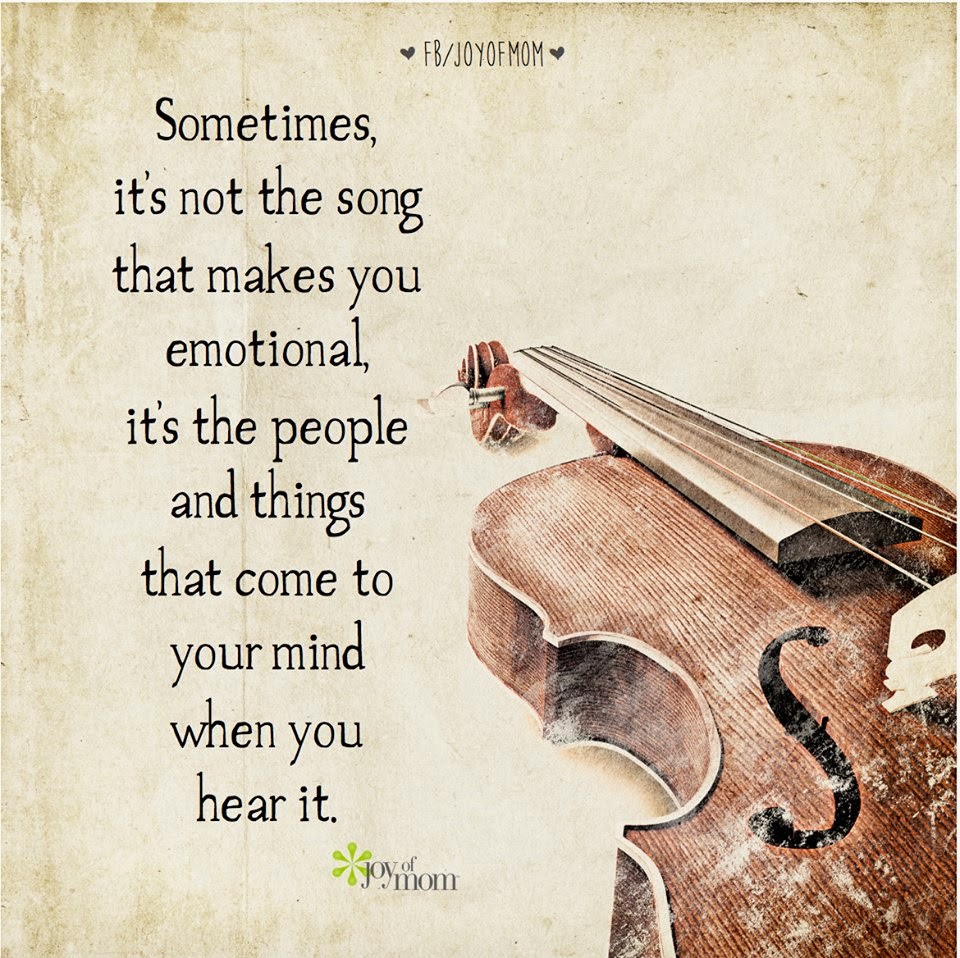 Memories. Sometimes it is all that is left. I consider myself lucky that music can trigger those memories for me, because then I can feel peace at any moment in the day. For besides my vast collection of Pink Panthers I am known for my love of music.

I come by it honestly. The more I research my family history the more I find relatives that have the same passion and often talent for music. Be it writing or playing or listening. It's in the genes. My mother taught me that passion by example.

My earliest and fondest memories involve music. Back in the day choices were limited. With enough homemade wine passed around the adults would break into song, belting out all the traditional songs from the old country. The children sang along - for we were all familiar with the language and the lyrics. If there happened to be an accordion around, well that was the accompaniment.
In the past quarter century, I have had limited occasions to recall those beautiful words in public but rest assured the lyrics come flooding back with the first strains of the melody. It feels like I am surrounded by my family when I hear those songs. "Sul Cappello, Evviva, Evviva il reggimento."

My mother had a fair collection of albums but the majority were songs from Italy. In fact that was the title of one of the LP's. I still own those records, but unfortunately have no equipment on which to play them. But I have many fond memories of adjusting the pennies on the toner arm of the stereo that my dad built. It was a beautiful piece of furniture that had space to hold LP's and 45's on one side and a turntable on the other. I'm told that the inner workings of the unit were created with the help of my Uncle that passed with my Dad. It was a collection of tubes and wires but had such fancy details as a light that not only illuminated the controls but alerted you when it was left on. Reception for the radio was astounding considering it's basic simplicity. For nostalgic reasons only, I hung onto that stereo well into my 40's and I kept one of the knobs from it, still in the top drawer of my desk to this day.


Mom was not beyond using the tactic of bribery to get her four children to do what she wanted. Case in point, when she got tired of employing all the tried and true methods for getting me to stop chewing my fingernails, she took to the darkness and bribed me. And for a 33 cent 45 I quit - at least temporarily lol! That 45 is still in my collection with it's original price tag entact. Day After Day by Badfinger was released in 1971, and it was the start of a collection that blossomed to more than 550 at last count.

To appease the tastes of so many different musical minds in the early days, we often gravitated to K-Tel purchases of compilation hit music. The first one that I got to pick out and call my own was another bribe of sorts. I desperately wanted a chocker and my mom didn't like them. She slyly suggested that I would want music instead - a whole album. A chocker would have been soon forgotten. To this day I scour old bins of records to find that precious collection again. I would also like to know how it disappeared from the house in the first place - curses on the culprit whoever you are. I remember the cover artwork in my mind but can't seem to reproduce it on paper, the only song that I remember is Obla-di Obla-da by the Beatles. The album meant a lot to me.

We didn't just listen to music, we used it as a source of entertainment. In the evening the local radio station CKPR would hold a contest called The Top Ten. You had to listen to all 10 popular songs and recite them back in descending order to win a prize. The trick was to have a quick finger on that old rotary dial phone to key in the last number upon hearing the first few notes of the number one song. Of course you had to have entered in the previous 6 numbers prior or you would never be the first caller in. It was competitive and I don't think we ever won but we sure loved playing. It was a real family event.


Linda (youngest sister) and I took music appreciation to a whole new level. We spent hours upon hours listening to songs over and over again and we painstakingly tried to decipher and then immortalize the words in our own hand. You don't know how good you have it now that a simple google search or simple click on the Shazaam app will get you all that information without the toil. And between those two extremes of lyrical searches was the magazines that included lyrics of the popular songs of the day. I had such a collection of those lol!
When we actually got to the point where we bought an album by a single artist, it was a real treat to find the lyrics printed within. But with compilations and "best of's" it wasn't likely to happen. So with either her or I at the control of the arm of the turntable and with a steady hand we would move the song back one or two grooves in the vinyl over and over until we came to a consensus. With an ear right next to the speaker, eyes closed and face scrunched in concentration it was like the worlds best game. In the end, having those lyrics so we could confidently sing along meant the world to us. And that folks, is probably why to this day I can listen to the same song over and over again ad infinitum and not tire of it ever.

Rod Stewart and his Every Picture Tells a Story release in 1971 heralded my departure from an egocentric child to awareness beyond self. I thought of my mothers musical taste more along the traditional, country or pop genres. This was a u-turn from the norm. And as I sat at a safe distance, hidden from view, I watched as my mother sat on the floor shoulder to shoulder with a man. To my burgeoning hormones, it was love. The man was a university student who was boarding with us. Chris might have been in his early or even mid-20's, Mom 10 years his senior. Today, I think "Way to go Mom!" Back then my jaw hit the floor and my diary got a page full of shock. And every time I hear a song from that album I still think of love and compassion and of the look of happiness on my Mom's face. Bliss! 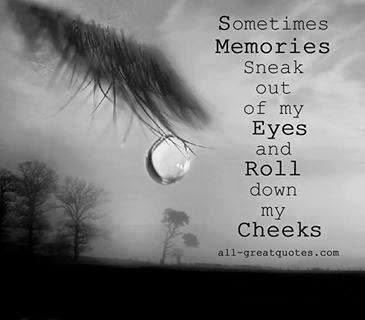 We didn't remain passive listeners for long. Starting with a paper keyboard on the kitchen table, Sandra (my oldest sister) and I began piano lessons 6-8 years old. Maybe younger. It wasn't too long before the need for a real piano became a necessity as we continued to pursue lessons with the nuns of the Avila Centre in Royal Conservatory format. Ron wanted to learn guitar - a few lessons in piano would be helpful. His health and Mom's death sidelined the aspirations of guitar, and he did continue with his piano. Although alternative music on the radio station became more his style and not the classical repertoire or the nuns. My youngest sister Linda picked up piano playing of her own volition. She would try and get in on the action after we had practiced and very quickly was picking out tunes she had heard. A talent not to be wasted she soon found herself tickling the ivories as well. Moms original intention was that the ability to play an instrument made you a more well rounded person. Personally, in hindsight, I think that she had the desire to play instruments but was never offered the opportunity. Hearing music in my sleep may have been her trying to teach herself to play in secret.

And then there was dance. For what is music without the dance. Sandra, myself and Linda all took dance lessons. Ballet, tap and jazz. To be honest I sucked! Well at least compared to my sisters I did. Let's just say choreographed dance wasn't my thing, but really, I dislike lessons. I felt bad because I was only in the back rows of the dance numbers while Linda and Sandra shone in the front and lead positions. Oh well, we can't excel at everything we try.


Just Breath - Pearl Jam
"Meet you on the other side"

After they were gone there was a considerable time were Ron and I were estranged emotionally if not physically. He tolerated me and I didn't know what to do with him. We didn't know how to rebuild our family from 5 to just the two of us. 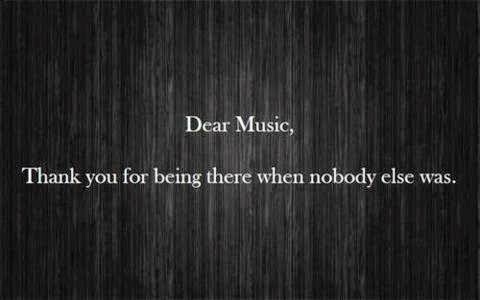 But with a physical separation when I moved out, we found our connection. We were just two kids trying to make our way through the world on our own and hanging on to each other with spiritual threads. Music gave us that stepping stone into the world together. I called on him to help me build and compile my audio system and he shared the music that he had gravitated towards. To this day still my favourite genre of music, the alternative format and the Canadian musician. Bands like The Deserters, the Villians and Audience. Gone was Top 40 radio and I searched out the CFNY of Toronto for my fix of new music.

It didn't pigeon-hole the music I gravitated to, it expanded it and the vinyl collection. And although I may get a little teary-eyed when I hear Slade I will never stop listening to it because the memories are all I have. Even if some of those memories are sad not all of them are. 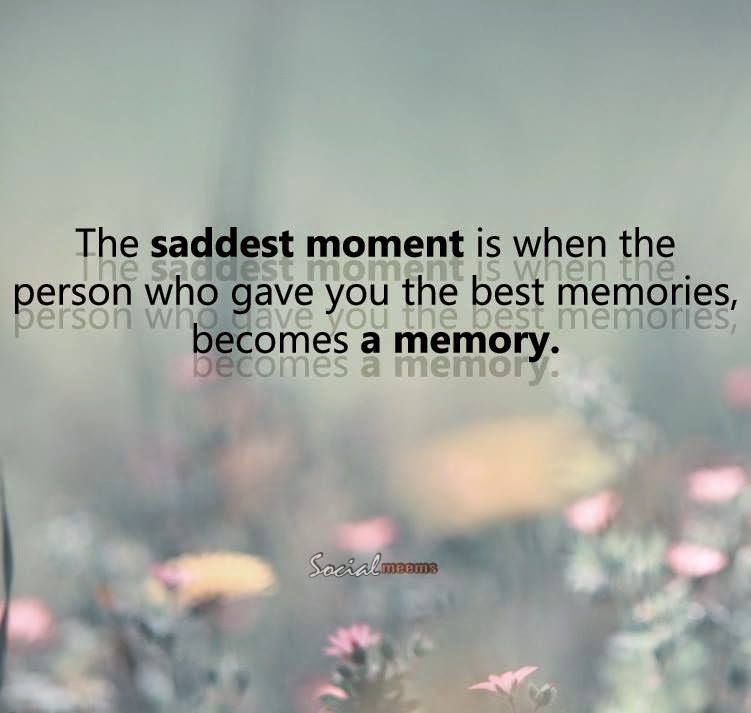 **On this day, March 21st I have endeavoured to remember my family in the written word in many different ways. This is one of them. For I never feel alone like I do on this day because 41 years later it still hurts.

I am eternally grateful to have found this forum to share and release some of the intense feeling that I have kept to myself for so many years. 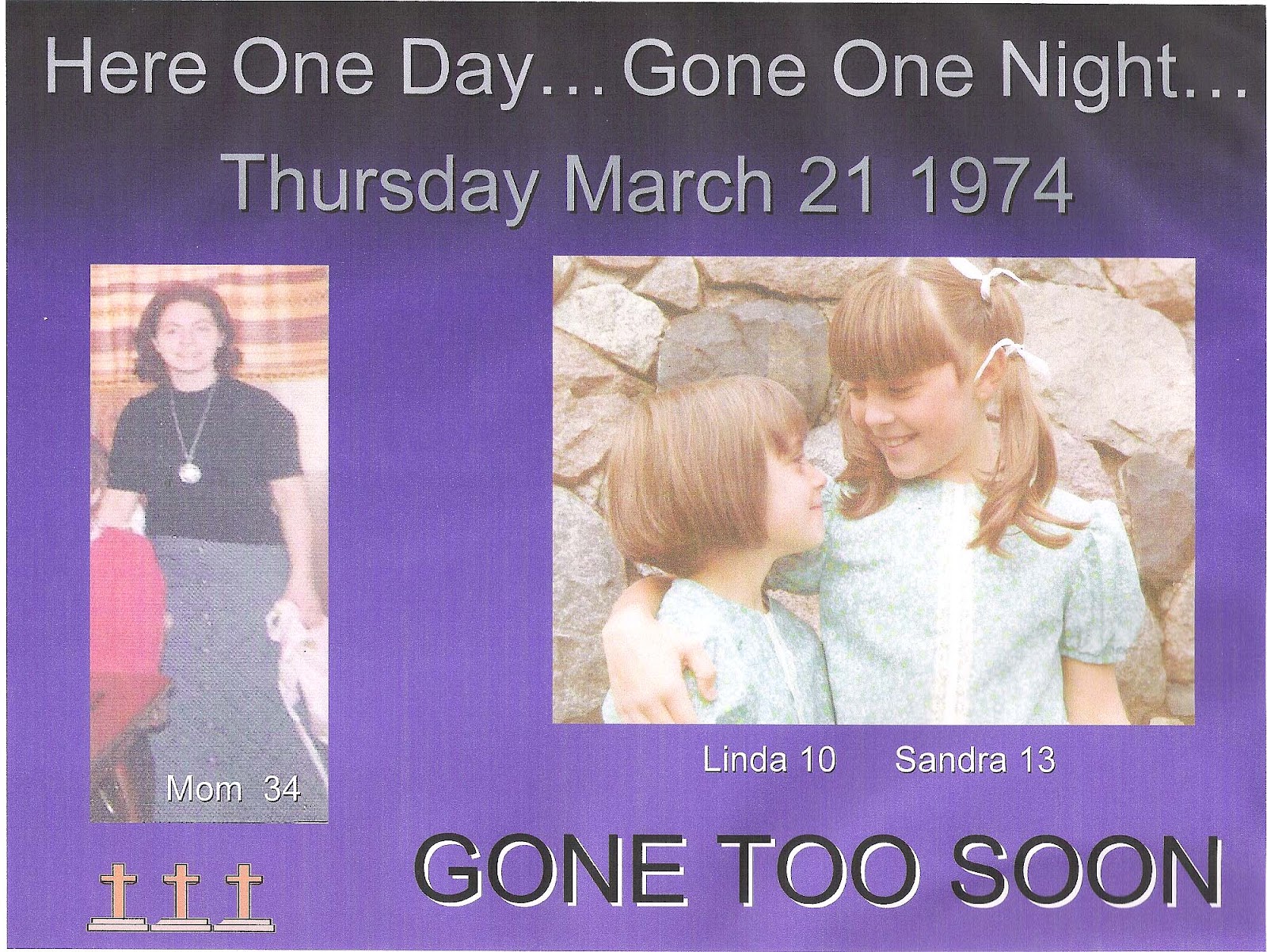