Ron Sdraulig - the Beginning of The End

They say the cream will always rise to the top.
They say that good people are always first to drop. 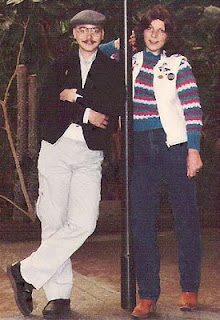 I am going to commemorate my brother Ron on the occasion of his birthday - January 9th, 1963. Today he would have been 50. He died when he was 21. He had Hodgkins Lymphoma and battled the cancer since he was 9 years old. He also battled society's negative perceptions of sick children and young adults. He didn't get extra concessions to complete school work that he missed because he was hospitalized or sick from treatment - instead, he was called upon to explain his extended absences and why he should be given a passing grade when he missed so much of the curriculum. He was beyond happy when he could do typical teenage things like getting a part time job to earn the money for his future car. He worked at MacDonalds, when the chain was still a relatively new phenomenon in our northern hometown of Thunder Bay, Ontario. Interestingly, it was shortly thereafter that he stopped eating there - officially, he told me it was because he ate the Big Mac on his breaks and simply got sick of them. Maybe it was too much of an eye opener seeing how they were actually "produced". The MacDonalds story isn't about the food however, it is about his value as an employee. For that, he won a portable radio in the shape of a large French Fry, and a wall clock that looked like a big pocket watch with Ronald MacDonalds sitting on an invisible bench waving - a replica of his form found outside many restaurants. Then the cancer came back and he needed time off to get treatment/surgery at the Mayo Clinic in Rochester. And MacDonalds fired him. It was different times and I have no doubt that similar treatment would not occur today. But it did happen to him and it changed him.

Recurrences of cancer were common for him. I don't know all the details but despite periods of remission, he was never deemed cured. After MacDonalds actions, you saw a change in Ron. School became less important. He didn't see a future for himself. If MacDonalds could fire him from a part-time job, who would hire him for a full-time career or job - the likelihood of the cancer returning was greater than a free and clear diagnosis. It was the beginning of the end. And it was a terrible waste because he was an intelligent young man who could have had so much to offer. That was the only job I remember him ever having.

Ron did graduate from Hammarskjold High School in Thunder Bay and went on to attend Lakehead University. Marks aside, Ron was admitted to the university and into residence because it was inadvisable for him to attend school to far away from his medical team. Graduation was not the goal as much as living the life. I think he was taking some business courses but I don't recall what, he didn't graduate and didn't have the opportunity to embark on a career. But he did have the time of his life during University. The party life style and student culture. He was adamant that no one knew his cancer story because he did not want special treatment. He just wanted to fit in and try to have a normal life like everyone else. He was really happy during that time. He met a lot of really great people.

Living life was a priority. He jumped in with both feet knowing that his time was limited. He traveled to Hawaii and stayed in penthouse suites. He bought cars he didn't need and while my grandmother stood in the corner clutching her heart, he got a motorcycle license and then a motorcycle. But eventually the wind was sucked out of his sails and he became resigned to his fate. My life was in transition at the time and I was ending a relationship. Ron spent his last months worried about my fate and sanity once he was gone. For with his passing I would officially be all alone in the world with every part of my family having gone on. I told him I would be okay and I couldn't let him down. It wasn't my choice but there wasn't a lot of choices. I had to learn how to live my life suddenly alone and feeling abandoned. I think I did okay when I look back over the years. But more than a quarter of a century later the thought of him hurts so bad and I miss him so much that the tears flow like the water of Kakabecca Falls.

It was supposed to get easier god-damn it!


There You'll Be - Faith Hill 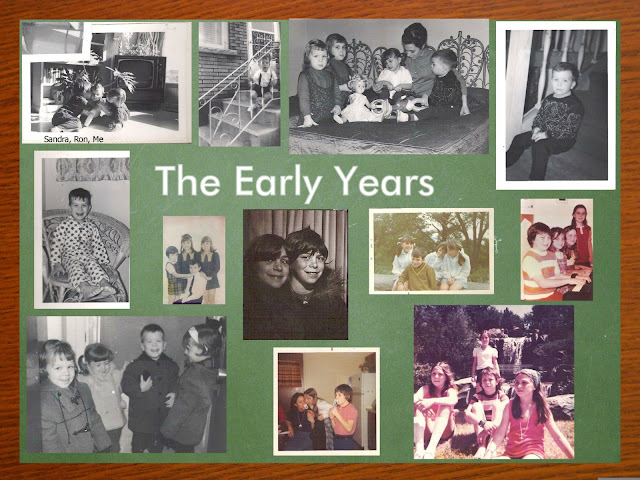 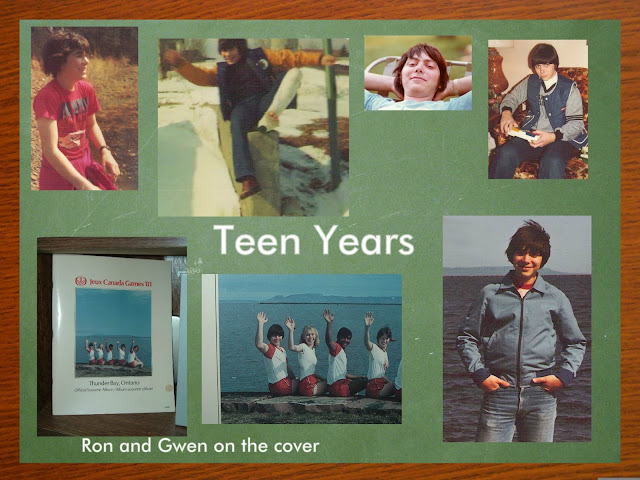 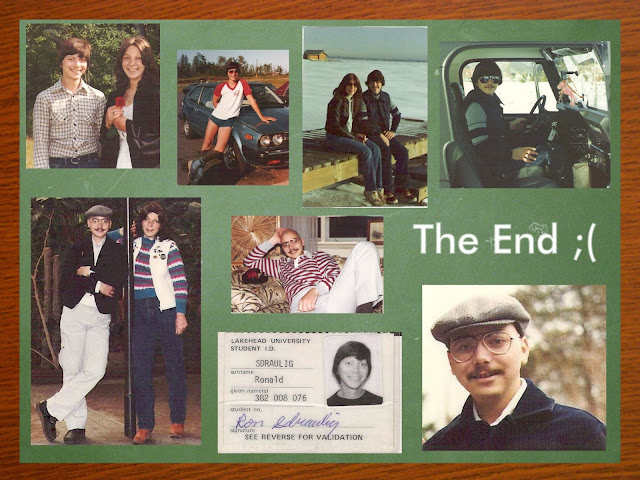 "'Cause I always saw in you my light, my strength
And I want to thank you now for all the ways
You were right there for me"

I cried when you passed. I still cry today. The depth of my love and admiration for you couldn't make you stay. Your heart stopped beating. God broke my heart to prove that he only takes the best. Even if it's only in my dreams and the depth of my soul and being, you'll be there forever.

credit where credit is due
Pictures are the sole property of me - Liz Gigi Sdraulig
Kizoa.com assisted with the creation of the collages
Posted by Unknown at 9:58 am No comments:

The Rubber Band Will Snap One Day

Another year has passed. While all the festivities of the Christmas season and New Year celebrations are quickly becoming faded memories, my memories turn to my reflections of my sister Linda. Linda Dee Sdraulig was 10 years old when she died in 1974. Today, January 2, 2013 would have been her 49th birthday. Linda was my youngest sister and the sibling that I was closest to in the family. We had a lot in common. I'll never know if that closeness would have continued for the rest of our lives but it was an amazing relationship when we were kids. I am many things and have been saddled with many labels but fortune-teller is not one of them. There have been times over the years when I have wondered what the future would have been like. How different life would have been. Certainly the holiday celebration would be different with family visits to be covered. I remember once telling my Mom that I would live with her forever so she never had to be alone. That would mean that I would still be living in Thunder Bay, possibly.

Life holds no guarantees and every memory is another experience that has the potential for changing all your tomorrows. A chance meeting can lead you to follow a completely different road. Many people who came into my life may not have been anywhere near had my sister remained a part of my physical reality. Linda and I were very close before she died when I was 12 years old. We had a lot in common and we were each others confidant, co-conspirator, best friend and ally. I have missed having that relationship in my life. I have seen the closeness that some sisters share in their adult life and I am jealous. It was in the palm of my hand...and then in the blink of an eye it was gone.


If I had a crystal ball to peer into my life that could have been, I would want to know what Linda would have been like as a teenager. She will always be a 10 year old girl with dreams of being a famous dancer or teacher. Right before she passed away in March 1974, she won a dancing competition and was given a scholarship to dance with the National Ballet of Canada as part of a summer camp. Would this success have led to bigger and better dance pursuits or satisfied her notion of the glamour of prima ballerina? At 10, your whole life is laid before you to weave whatever tapestry strikes your fancy. You can turn any which way you choose or take a u-turn and try again. She was a conscientious girl who loved to care for her dolls, she enjoyed crocheting little beds for her toys and animals. She was helpful and caring. She would have made a great mother. I wonder how many kids she would have had, what names would she choose? Would I be a good aunt? 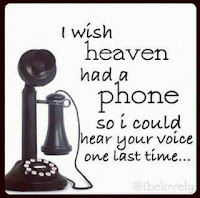 But more than look into the future I would want to go back into the past. If my future means that Linda is not a part of my life, I want to go back and give her one last hug to last a life time - is that even possible? I want to tell her one last time that I love her. I want to tell her how much I'll miss her. I want to hear her. I can look at pictures and remember moments in time but her sweet voice is gone forever. We didn't have video camera's like you there are today. I forget her voice. I forget the sound of her whispering secrets in my ear that made me smile. I forget the sound of her singing rhymes as we were skipping in the driveway on a summer afternoon without a care in the world. I forget the sound of her voice as it echoed within the walls of a snow fort we just built, pretending it was our home as we sat on the snow chairs that were molded to our snowsuit clad bums. Watching the cold frosty air escape our mouths as we pondered life.

The memories like pictures are there but it is a silent movie forever frozen in time like the walls of the snow fort. The reel goes around and around like an elastic band and it's okay, I have had a long time to accept the reality of my loss. What scares me is that the rubber band will snap with degradation that occurs over time and that not just her voice will be wiped from my memory but her 10 year old self. Forever the optimist, with the passage of time, I am every day one day closer to holding her in that long overdue embrace. Even if it is not with the earthly body that I have today.

Having someone so special in your life, I like to think is better to have for a short time than never at all. For I am who I am because I knew a beautiful young girl called Linda who impacted my life with her presence in it. The love I feel for her will never fade!

Who You'd Be Today by Kenny Chesney

Sunny days seem to hurt the most


Wear the pain like a heavy coat
I feel you everywhere I go
I see your smile, I see your face
I hear your laugh' in the rain
I still can't believe you're gone


Sunny days seem to hurt the most
I wear the pain like a heavy coat
The only thing that gives me hope
Is I know, I'll see you again someday

(Love the lyrics and the sentiment)

Who You'd Be Today - Kenny Chesney
Posted by Unknown at 7:40 pm No comments: